As the Queen’s only daughter Princess Anne has always had a special relationship with her mother.

Anne was born in 1950, just two years before the Queen would ascend the throne.

At the time of Anne’s birth, she was third in line to the throne behind prince charles. She is currently 14th after Prince Edward‘s children.

However, it wasn’t until andrew and Edward were born that the Queen was in a position to really balance her two jobs perfectly: being a monarch as well as being a mother.

When Charles and Anne were young, the Queen was committed to following in her father’s footsteps. She was also compelled to work incredibly hard to prove to all around her that she was right for the job.

According to historian Carolyn Harris, Anne and Charles had to deal with a great deal of separation from their mother.

“There was a sense in the early years of Queen Elizabeth II having to prove herself on the world stage. And this meant extended periods of time when she didn’t see her children,” Carolyn Harris told the BBC.

We can only imagine this was a difficult time for the Queen, leaving two young children for several months.

When Anne was aged two, the Queen and Prince Philip left her and four-year-old Charles for six months while they toured the Commonwealth. A year later, they went on another six-month tour while the children were cared for by nannies, as well as the Queen Mother.

By the 1960s, the Queen was able to spend more time at home with the children. However, there has been much criticism of the Queen and her position as a mother that Anne has had to defend many times publicly over the years.

The Princess has told the BBC she adamantly disagreed with rumors her mother wasn’t as nurturing to her children as she could have been.

“I simply don’t believe there is any evidence whatsoever to suggest that she wasn’t caring. It just beggars belief,” Anne told the BBC.

“I don’t believe any of us for a second thought that she didn’t care for us in exactly the same way as any other mother did.

“I just think it extraordinary that anybody could construe that that might not be true.”

The princess has also said she doesn’t understand people who ask her if she sees the Queen as her mother or as a monarch: “She’s my mother and the Queen.”

But, as with any mother/daughter relationship, the two have had their fair share of disagreements.

According to Women’s HealthAnne has always made it very clear that she isn’t entirely comfortable with the burden of living as a public identity.

And, it’s believed the Queen was not terribly happy about Anne’s divorce from her first husband, Captain Mark Phillips. But, as with “ordinary” families, people get divorced, displeasure is put aside or dealt with, and life goes on.

In 1992, Anne married Tim Laurence, a former equerry to the Queen, who became a Vice Admiral. It’s believed the Queen has always had a good relationship with her son-in-law.

When it comes to life outside of royal duties, Anne and her mother shared a deep love of horses. Anne’s success in the equestrian world is also believed to have made them closer.

A skilled horsewoman, Anne won the individual championship at Burghley in 1971, and was voted BBC Sports Personality of the Year.

In 1976, the Princess became the first British royal to compete in the Olympics, riding in the three-day equestrian event.

Princess Anne has also followed in her mother’s footsteps with her dedication to her work; she is frequently recognized as the hardest-working royal, attending hundreds of official engagements each year.

In 1990, the Princess was nominated for the Nobel Peace Prize by President Kenneth Kaunda of Zambia for her work as president of the charity Save The Children.

Royal writer and body language expert Judi James told the express that out of all the Queen’s children, it is Anne, who is very similar to her mother.

“She is stoic, hard-working, practical, outspoken and challenging. Her low-key, unfussy, immensely solid role in the Queen’s public life makes their relationship look similar in many ways to that between the Queen and her husband,” Judi says .

“Like her father, Anne appears to make the Queen laugh and most poses between the two women suggest a shared sense of humour, bringing out a side of the Queen that we rarely get to glimpse.”

Let’s not forget that Anne has always been considered the most “low maintenance” of the Queen’s children.

“Anne has always been the one who just gets on with the job, even sailing through her divorce and remarriage in a low-key, practical way,” Judi told the express.

There’s no doubt Anne’s childhood was easier than Charles’ – not only did he have the pressure of being heir to the throne, but he was sent to a boarding school in Scotland which he has described as being a very difficult time.

In contrast, Princess Anne has spoken warmly of her childhood and being educated closer to home at Benenden in Kent. This closeness was reflected in later years, when the Queen gave Anne the title of Princess Royal.

When the royal family was informed the Queen was nearing the end of her life, Princess Anne quickly traveled to Balmoral to be with her mother.

And while some family members missed their chance for a final goodbye with the Queen, Anne and Charles were by their mothers’ side until the very end.

For a daily dose of 9Honey, subscribe to our newsletter here 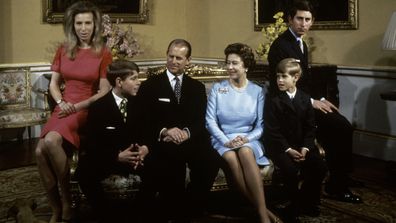 The Queen’s four children through the years: In pictures