Queen Elizabeth II’s coffin has competed a procession at walking pace through central London, and is bound in a hearse for her final resting place at Windsor Castle.

After being pulled nearly two kilometers from Westminster Abbey on a gun carriage by 142 Royal Navy sailors, the coffin was transferred to a hearse at Wellington Arch, near Buckingham Palace.

Dozens of Buckingham Place staff stood in a neat line in the palace courtyard, and many bowed or curtseyed as the procession passed by.

The monarch’s coffin will go by car the 32kmto Windsor Castle, where she will be interred later Monday alongside her husband Prince Philip, who died last year.

Dense crowds packed the route through the heart of ceremonial London—and thousands more people are lining the more workaday suburban roads the hearse will take on its journey to Windsor.

Earlier King Charles III and other senior royals marched behind the coffin to Wellington Arch at Hyde Park Corner with tens of thousands lining the route.

Gun salutes were fired in nearby Hyde Park, and Big Ben rang out at one-minute intervals during the procession

The queen’s coffin sat at the center of the Abbey after being borne by pallbearers and accompanied by her son King Charles III, and other members of the royal family.

They included Prince William, his wife Catherine, Princess of Wales, and their two elder children George, 9 and Charlotte, 7. Prince Harry and Meghan, Duchess of Sussex, also walked behind the coffin.

William and Catherine’s youngest son, Louis, was not in attendance.

Dean of Westminster David Hoyle opened the service in the ancient abbey, where Elizabeth was married and crowned.

“We gather from across the nation, from the Commonwealth, and from the nations of the world, to mourn our loss, to remember her long life of selfless service, and in sure confidence to commit her to the mercy of God our maker and redeemer ,” he said.

The opening hymn at the funeral was The day thou gavest, Lord, is ended. The hymn was written in 1870 by the Rev. John Ellerton.

It was also sung at the Diamond Jubilee celebrations for Queen Victoria in 1897, and remains a popular church hymn in Britain.

The second hymn, The Lord’s My Shepherd was sung at her wedding in 1947.

The third hymn ‘Love divine, all loves excellent’ is written by Charles Wesley, perhaps the most significant hymnwriter in English history.

The song was also performed at the wedding of William and Kate in 2011.

Most of the senior royals are wearing military uniforms at the funeral, including King Charles, Prince Edward, Princess Anne and Prince William.

Prince Andrew and Prince Harry are in civilian suits.

The coffin was carried by ten pallbearers who were all former equerries, or attendants of the royal household.

US President Joe Biden and his wife Jill, the United Kingdom’s Prime Minister Liz Truss, and Australian PM Anthony Albanese are all in attendance.

The day the world stood still: The funeral of Queen Elizabeth II

Also in attendance are Boris Johnson, who was the prime minister at the start of the month, David Cameron, Tony Blair, Gordon Brown and Theresa May.﻿

Princesses Eugenie and Beatrice arrived with their mother Duchess Sarah, and also seen entering the Abbey are Zara Tindall and husband Mike Tindall.

Earlier today the queue to see the Queen lying in state at Westminster Hall was closed to mourners after hundreds of thousands had filed in front of her coffin since September 14.

Many of them had spent cold nights outdoors to pay their respects around the queen’s flag-draped coffin in a moving outpouring of national grief and respect.﻿

The closing of the hall marked the end of more than four days of the coffin lying in state and the start of the UK’s first state funeral since the one held in 1965 for Winston Churchill, the first of 15 prime ministers during Elizabeth’s reign.

Two days before her September 8 death at her Balmoral summer retreat, the queen appointed her last prime minister, Liz Truss.

The last member of the public to view Queen Elizabeth II’s coffin as it lay in state at the Houses of Parliament was Chrissy Heerey, a serving member of the Royal Air Force from Melton Mowbray.

Heerey said “it felt like a real privilege to do that”.

She said Monday she went through Westminster Hall twice – the first time in the early hours of the morning and then again just before its doors closed to mourners at 6:30am.﻿ 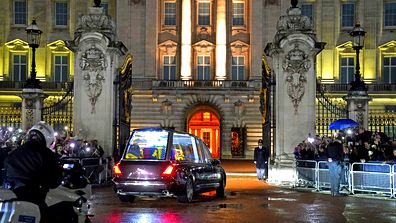 How the last 10 days of mourning have unfolded

She said the experience was, “one of the highlights of my life and I feel very privileged to be here”.

Monday was declared a public holiday in the UK in honor of Elizabeth, who died September 8 at 96.

Elizabeth’s coffin was taken from Westminster Hall, across the road to Westminster Abbey, on a royal gun carriage drawn by 142 Royal Navy sailors.

The same carriage was used to carry the coffins of late kings Edward VII, George V and George VI, and of Churchill.

Dignitaries arrived later, with many heads of state gathering at a nearby hospital to be driven by bus to the abbey.

The funeral will end with two minutes of silence followed by the national anthem and a piper’s lament, before the queen’s coffin is taken in a procession ringed by units of the armed forces in dress uniforms, with the queen’s children walking behind, to Wellington Arch near Hyde park.

There, it will be placed in a hearse to be driven to Windsor for another procession along the Long Walk, a five-kilometre avenue leading to the town’s castle, before a committal service in St George’s Chapel.

She will then be laid to rest with her late husband, Prince Philip, at a private family service.

Central London was already packed before dawn Monday with people seeking out a prime viewing spot, and authorities warned that it would be extremely busy.