Prince Harry made an emotional tribute to his Granny, saying he was ‘forever grateful’ for her support for him, his ‘darling wife’ Meghan and her beloved great-grandchildren Archie and Lilibet — who the Queen had barely met.

Harry added: ‘We smile knowing that you and Grandpa are reunited now and both together in peace.’

What a brass neck he has to talk about peace when he and Meghan so selfishly shattered Prince Philip’s and the Queen’s last weeks before Philip died, with their incendiary Oprah Winfrey interview.

To my mind, their accusations of racism in the Royal Family and claims of callous behavior towards Meghan caused even more damage than Harry’s mother Diana managed at her most vengeful.

Prince Harry made an emotional tribute to his Granny, saying he was ‘forever grateful’ for her support for him, his ‘darling wife’ Meghan and her beloved great-grandchildren Archie and Lilibet — who the Queen had barely met 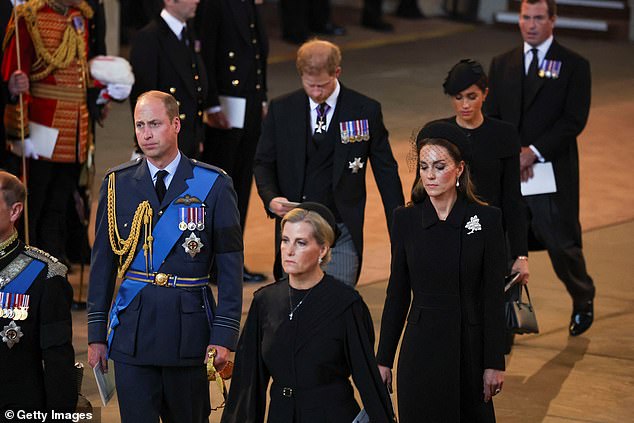 What a brass neck he has to talk about peace when he and Meghan so selfishly shattered Prince Philip’s and the Queen’s last weeks before Philip died, with their incendiary Oprah Winfrey interview

Even worse, with brand Archewell on the wane in the US and Netflix demanding its pound of flesh, Harry’s still planning to milk the monarchy by publishing his memoirs.

They were to come out later this year and we are supposed to be grateful he has postponed publication until 2023 as a mark of respect for the Queen. But doesn’t he realize how damaging it would be to his father, King Charles, for the book to appear just months into his reign?

More from Amanda Platell for The Daily Mail…

The delay might give Harry time to add extra chapters about the pain of losing his beloved Granny, to sprinkle extra royal magic. This is not about respect but shamelessly monetizing the family he’s turned his back on.

And what other titbits will he now add about the horrid royals, after William and Kate extended the olive branch by inviting the Sussexes on the Windsor Castle walkabout? Why would any of the senior royals trust him and his wife now — they must fear that anything they say could be used against them.

The funeral should be a time of reconciliation; it still could be. But the Sussexes will never be trusted again if there is a single unkind word about the monarchy in Harry’s book.

You may have got $20million for your memoirs, but the money is dirty, Harry. No publisher would pay that for you to muse about the ‘life lessons’ that have shaped you. They want sensation — your value is in traducing the royals with your ‘truth’.

The family have been denied sight of the book and the Palace is bracing for another Oprah-style nuclear attack. So, Harry, a message from the millions of Brits who once loved you: if you ever again want to hold your head high in the UK, don’t just delay your memoirs. Bin the book for ever.

Hasn’t King Charles looked splendid in his military uniform with his rakish new longer hair. A style statement — or just an attempt to cover his famously big lugs? Either way, we’re lovin’ it, Charles.

When Mum finally met the Queen

My mum met the Queen in Perth during her 2011 tour and had a one-on-one greeting with Her Majesty. This was 57 years after a tour where a meeting between Mum and the Queen had to be canceled because of a polio outbreak.

An aide had told us the Queen’s favorite flowers were home-grown, scented, English roses. So the night before, Mum and I set out with a bucket and secateurs, raiding neighbours’ gardens. We practiced the bouquet handover in the back garden for hours, yet when the moment came Mum, with early onset Alzheimer’s, thought momentarily she was the Queen and refused to hand them over.

Her Majesty lowered her smiling face into the roses, firmly grasped them out of Mum’s hands and declared them beautiful, saying how lovely it was to finally meet Norma.

Putting up with a five-mile queue, those waiting 12 to 14 hours to pay their respects to the Queen are of all colours, all creeds, all nationalities — a snapshot of Britain’s great diversity and a poke in the eye for Meghan and Harry’s claims that we’re a bunch of racists.

In her Panorama interview Princess Diana was asked if she hoped William would succeed the Queen rather than the Prince of Wales. She replied: ‘My wish is that my husband finds peace of mind, and from that follows other things, yes.’

Well, Charles has found peace, with Camilla — so in the end that ‘devastating’ interview held no sting.

Oprah Winfrey, whose 2021 Meghan and Harry program dropped a bomb on the Royal Family, says the Queen’s death offers the chance of reconciliation with Kate and William. Surely, all Oprah is interested in is ‘reconciling’ with Meghan and Harry for their next cruel TV interview.

Boomerang Kate wants to do a Di Down Under

With plans afoot for Wills and Kate to visit Australia next year, canny Oz PM Anthony Albanese has ruled out a referendum on ditching the monarchy during his first term. Maybe he’s had a word with Bob Hawke, who was PM when republican sentiments were surging Down Under — until Charles and Diana’s sensational tour in 1983. As Hawke said, it set the republican case back decades. The Kate and Wills effect will do exactly the same. 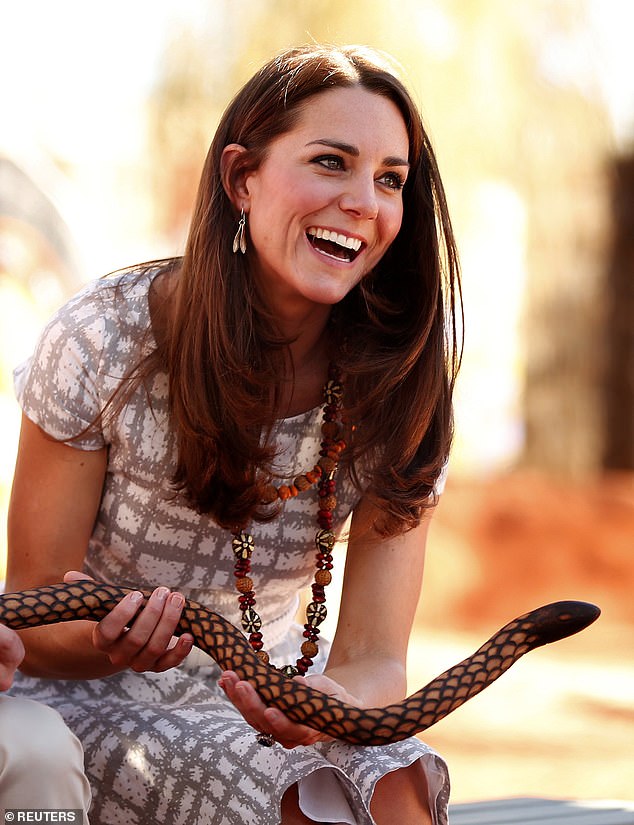 With plans afoot for Wills and Kate to visit Australia next year, canny Oz PM Anthony Albanese has ruled out a referendum on ditching the monarchy during his first term

The crowds of wellwishers clearly loved the Countess of Wessex as much as she did them. Was it just emotion that made her return twice to hug autistic Josh Macpake, who was carrying a teddy bear dressed like a guardsman?

Or, as his mother Sue believes, did Sophie remember meeting Josh at Blackpool Tower three years ago?

No great state occasion is complete without jobsworths in hi-vis jackets.

This week, they were only just stopping short of full body searches of those queuing to see the coffin, confiscating anything from a small bottle of Chanel No 5 to a packet of Werther’s Originals. I cannot recall a single recorded injury from a tiny squirt of perfume nor a projectile toffee.

Actor Matt Smith, who unconvincingly played Prince Philip in The Crown, claimed on American TV that the Queen was a fan and ‘used to watch it on a projector on Sunday nights’.

A projector! What utter tosh. She’d have been watching the Sunday night results show of Strictly Come Dancing. 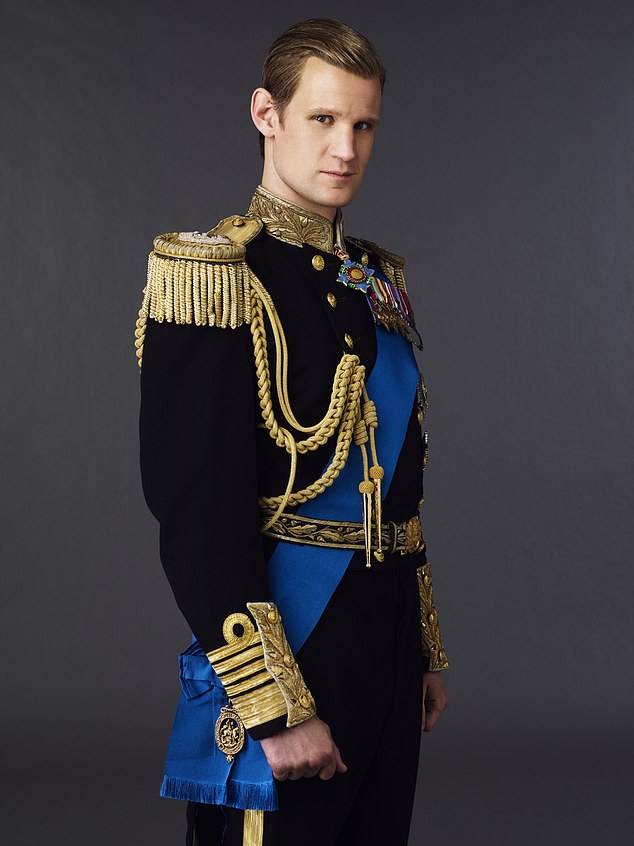 Actor Matt Smith, who unconvincingly played Prince Philip in The Crown, claimed on American TV that the Queen was a fan and ‘used to watch it on a projector on Sunday nights’

Nic’s tears of a crown

As she watched thousands line the streets when the Queen’s coffin passed through Scotland, with many thousands more queuing to pay tribute at her lying-in-state, that over-stuffed little haggis Nicola Sturgeon was stony-faced — no doubt witnessing her dream for independence dissolve with every loyal royalist Scot’s tears.

The husbands of Princesses Eugenie and Beatrice, respectively Jack Brooksbank and Edoardo Mapelli Mozzi, wore Her Majesty’s Platinum Jubilee medals — no doubt for services to duty above and beyond, after marrying into that dysfunctional family led by disgraced Andrew and his cling-on ex- wife Fergie.

Such has been the outpouring of emotion, even the republican Guardian reported: ‘There are two types of people in the UK right now: 1, The people in the queue. 2, The people watching the queue (on TV) with fascination.’ And let’s not forget the five million-plus who logged into the website Flightradar24 to follow the path of the RAF jet bearing the Queen’s coffin from Edinburgh to London.

Surprise Fact of the week: The Queen and Prince Philip’s well-seasoned oak, lead-lined coffins were made 30 years ago by specialist firm Henry Smith, which also produced coffins for Jimi Hendrix, Diana Dors and, perhaps most aptly, Freddie Mercury of . . . queen