Our Geeks wake up brimming with confidence with their brand new looks following their mega makeovers. It’s set to be a huge day.

With the Beauty and the Geek competition nearing an end, they have their final exam ahead of them. Here the Geeks enter the Beauties’ world and go speed dating while the Beauties become trivia masters.

Catch up on the latest episodes of Beauty and the Geek on 9Now.

Teams will put everything they’ve learned from the experience to the ultimate test before the top three pairs are announced.

“You’ll need to draw on everything you’ve learned about each others’ worlds to thrive in this challenge. You’ll be competing as a couple, but working separately,” Sophie tells the contestants.

For the Geeks, Sophie has staged a real-life speed dating event. The top performing geeks will be those that best impress the single ladies. While the beauties need to tap into their inner geek and host their own trivia night. Here they have to write their own questions based on their partner’s passion.

The winning team will be safe from elimination and go straight through to the Grand Finale.

The first geek to try his hand at speed dating is Aaron. It’s a big moment for the Geek who is feeling the pressure about making small talk.

But going into the situation armed with Karly’s advice, Aaron walks into his first date confidently and strikes up a conversation.

There’s one lady in particular that takes him by surprise.

“It actually did feel like I was lost in the moment,” he says.

The pair really hit it off as Aaron re-enacts a scene from titanic with her.

“The old me would have never had the confidence, but it’s now time for the new me to carry on forever,” he beams.

Next up is Chris, and the Yu-Gi-Oh! fanatic comfortably makes small talk with the women at the event. He gets complimented for his great eye-contact, which is something he struggled with in the past.

He even builds up the courage to get one of their numbers for a second date.

“That’s something I would have never considered or risked doing once upon a time,” he says.

The final geek to try his hand at speed dating is Michael, and he has the challenge of dealing with being hit on by some of the women.

The compliments are flowing for the Geek who looks visibly uncomfortable with the situation after recently making his relationship with Tara official. But he handles it like a gentleman and tells the woman that he’s taken.

Over at the Beauties’ trivia night, the girls are judged on their knowledge and if they can pass as convincing trivia nerds.

Karly hosts train-themed trivia and does really well at impressing the crowd. While Tara asks a bunch of questions based on superheroes and does well at keeping her cool.

Tegan has written some questions on Harry Potter, and despite some minor microphone issues, she transcends the room into a wizarding world of magic.

Sophie announces the best performing couple is Aaron and Karly, which means they are safe from elimination and straight through to the Grand Finale.

But before we find out who the bottom two couples are, the contestants head out on their final dates. 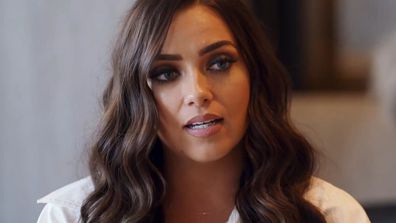 The cutest date moments so far on Beauty and the Geek

Bri breaks down over a past relationship.

It’s a particularly important moment for Michael, who wants to put his heart on the line and confess his feelings to Tara.

He organizes a romantic picnic in the park and feels like it’s the perfect opportunity to drop the L-bomb on the Beauty.

“I have definitely fallen for you and I can see myself falling in love with you,” he tells her.

Without any hesitation, Tara confesses she feels the same way before the pair share a kiss.

“He is very easy to fall in love with. I didn’t think I could ever meet someone that could actually make me believe in love again,” Tara tells the camera.

For Bri and Chris, the Beauty opens up about how much the Geek has helped her grow during the experience.

“He’s made me feel safe, he’s opened his ears when I needed him to listen to me and I feel like he’s really helping me get my zest for life back,” she reveals.

The Beauty gets emotional while opening up about her past relationship and going through hardships, before admitting she feels like he’s helped her get the “old Bri back”.

But the time has come for another elimination and Sophie reveals that Michael and Tara and Tegan and Anthony will battle it out for the remaining Grand Finale spot.

It’s the most nail-biting elimination challenge yet, but in the final round of the quiz Anthony and Tegan manage to take the win, sending Michael and Tara home.

While it is an emotional farewell, the couple are excited to take their relationship out into the real world.

“I definitely feel like I’ve won in so many ways, I’ve had such an amazing time and losing now doesn’t take any of it away,” Michael says.

“I think we have so many more amazing experiences to come, and now we get to go live them,” Tara adds.

And just like that our final three couples are revealed, with just one challenge left until the winner of Beauty and the Geek 2022 is crowned.